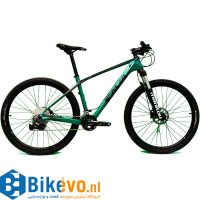 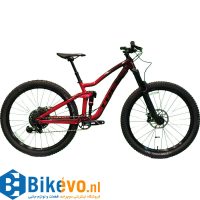 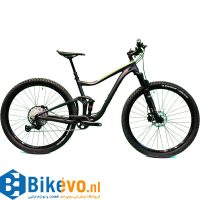 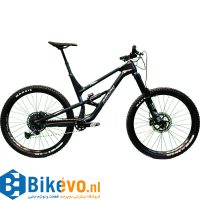 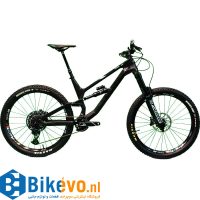 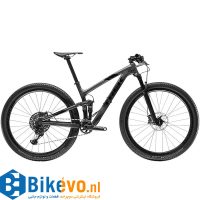 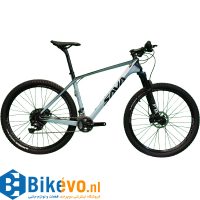 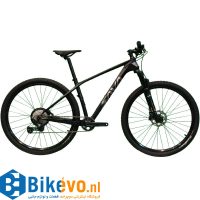 This is a fantastic looking bike. From a humungous diamond shaped top tube, it tapers down to a lean point out back, carbon throughout. With a sophisticated internal cabling system, the clean lines are uninterrupted, especially on this model with a single-ring drivetrain.

There’s a kind of essentials-only approach with the Focus that is going to hold plenty of appeal for many riders: the suspension layout is easy to understand – this pushes that– there are no geometry adjustments, and the travel is fixed at 160mm too. The suspension is from RockShox, top-of-the-line stuff, but without resorting to exotic, lesser-known manufacturers or super complicated dampers.

Basically, it has everything you need to win, and nothing you don’t. That’s not to say there aren’t some nice embellishments – the neat chain slap and down tube protection for instance – but it’s a bike that puts low-weight, geometry and suspension performance ahead of frame features.

The suspension is a simple linkage-driven single-pivot setup, handing out 160mm of very responsive, lively travel. It’s a buttery, supple suspension feel too, but with enough anti-squat it preserve the sprinty, excited performance under pedalling that we like about the SAM.

Compared to the whopping pivot axles we see on some bikes, the SAM’s pivot points are quite petite, with a pinch-bolt arrangement on the linkage that’s not common. Despite appearances, it’s actually robust and stiff, with double row bearings at rear pivot to handle all the huge forces there. Make sure you keep an eye on the bolt tensions as we experienced a small amount of play from the lower linkage pivot, which was easily sorted and didn’t recur.

A RockShox Monarch Plus is housed centrally in the frame, which means no bottle mounts, so it’s a pack-only affair. Having the shock nestled there between your knees gives easy access to the compression lever, so you can quickly flick it into firmer setting on the climbs.

Setup was straightforward. The sag gradients on fork and shock take the guesswork out of setting sag (20% up front, 30% our back), and the wheels are tubeless ready too of course. With the neat MatchMaker clamps for the brakes, shifter and dropper post, there’s only two bolts to worry about when dialling in your cockpit too.

The SAM is built for the kind of riding where you’re expected to hit unfamiliar terrain at warp-speeds, where you might find yourself in a white knuckled rock garden one second, and then having to muscle through tight switchbacks the next. It’s a big ask, but that SAM has it covered.

With slack angles and roomy length offset by the short rear end, the SAM nails that stability/agility blend that’s the holy grail of Enduro bikes nowadays. Magic numbers, putting you in a confident position to bomb into dicey looking chutes, but not bogging you down when the trails turn twisty.

There’s a lot of urgency to the way this bike rides, even on flatter trails, it keeps shooting forward in a way that few Enduro bikes do. It sprints out of corners beautifully, feeling even lighter than it’s already impressive 12.8kg weight figure.

The liveliness of the bike is its standout attribute for us. It skims and floats over the chunder, but not in a skittish or unstable way. Rather it just holds excellent speed, and the buttery smoothness of the suspension seems to prevent the rocks from tugging at the tyres and holding you back. We really came to love the way the SAM could pump speed out of trails, letting your work the bike, pumping into terrain that would see you simply holding on for dear life on board a lesser bike.

When you get a bit wild, the progression in the SAM’s suspension is a life saver, and while we certainly used all the bike’s travel, we never had any awareness of bottoming out – it nestles up smoothly to those last millimetres of travel, rather than smashing through to bottom out.
Cornering grip is superb too. The same liveliness we’ve noted above keeps the tyres tracking the dirt in loose corners beautifully, and the bitey Continental Kaiser front tyre will dig deep. Long, seated, foot-out corners are a specialty of this bike too – it’s got that ‘moto’ cornering balance dialled!

The SAM isn’t a ‘steady’ ascender like most Enduro bikes, it’s a genuinely enthusiastic and very capable climber. The low weigh is part of the equation, but the suspension nails a good balance of stability and traction when you flip the shock into its middle compression setting. The bike doesn’t use any proprietary travel adjustments or shock technologies, it gets the job done simply with a good balance of weight, central riding position and great suspension kinematics.

The switch to carbon results in a claimed weight savings of 600g over the alloy version introduced a season ago. The total weight for the top-end medium SAM C Team is 12.5kg / 27.5lb (without pedals).

Aside from swapping materials, the bike remains largely unchanged, save for small tweaks based on feedback from Focus Trail Team enduro racers. The bottom bracket is slightly lower, sporting 12mm of bottom bracket drop compared to 7mm on the alloy version. The chainstays shrink from 438mm down to 430mm, making the bike a bit more agile through the turns. 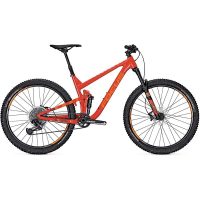 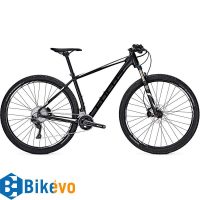 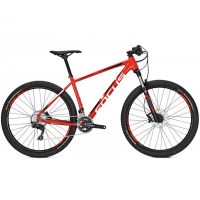 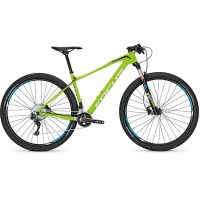 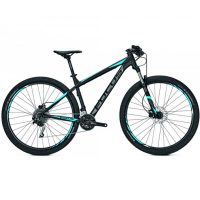 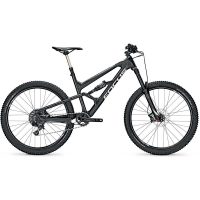